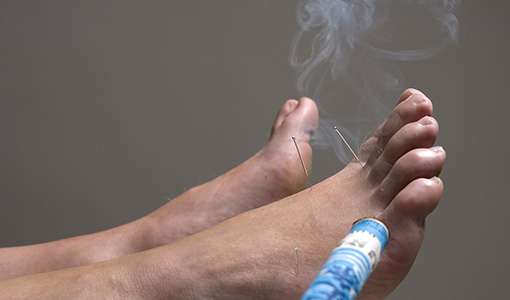 The best position for a baby prior to birth is spine opposite to the woman’s, turned to the left slightly and with its head in the pelvis, so called Left Occipital Anterior or LOA. The head down position is expected around the 34th to 36th week of pregnancy. Unfortunately not all babies will actually be head down or positioned anteriorly, so called breech or malpositioned. This can mean prolonging the labour, or cause increased back pain for the woman where the baby’s spine is pressed against her spine or even life-threatening situations for both mother and baby.

It is important that the correct knowledge of the baby’s position is known to plan for a suitable labour or attempting corrections. Acupuncture and moxibustion (called also moxa) can help, together with body postures to get the baby into the best birth position. For the first baby, treatment should be given around 33/34 weeks, though up to 36 weeks can still work or occasionally even later. Treatments later in the pregnancy are more likely to work for women having their second plus child. The reason for this is simply as the pregnancy continues there is less room for the baby to turn. I generally give one session of acupuncture; then teach the woman how to use moxa at home for self-treatment. If the woman seeks treatment late in her pregnancy, I will advise more sessions of acupuncture together with moxa.

In Chinese Medicine the root cause of poor baby position can be due to deficient “Kidney” energy, which leads to stagnation of this energy in the womb and the baby. The dynamic energy of “Kidney yang” must begin to grow to prepare the baby for the intense activity of birth. The corresponding energy channel to “Kidney yin” is the Bladder channel and it is a point on this channel that is key to getting babies into a better position, called Zhiyin or Bladder 67. A warming herb is used to heat this acupuncture point every day for 10 days. The herb does not merely stimulate the baby to become more active, though this is often felt, but it seems to encourage the baby to move into – and remain in – the best possible for birth. The acupuncture addresses the underlying constitutional energy deficiency of the mother. Dietary advice is sometimes given to support the treatment.

Read the Research section on my website about acupuncture during pregnancy.

It is always a great pleasure when the treatment works. A client received an acupuncture session at 33 weeks + 5 days and then continued applying moxa at home. She noticed a lot of movement after a few days of doing her moxa and explained,

“He/she was very active on around day 4 of the treatment and it did feel like s/he was shuffling around and changing position (we even videoed this as the movement was so noticeable). I had a midwife appointment on Friday and she thought the baby has turned too.”

The baby was indeed head-down for the birth and my client has kindly allowed me to share this impressive display of baby acrobatics with others.

If after all your efforts the baby remains in breech, it is still possible to have a vaginal birth and not inevitably result in a caesarean.

Now how often do you hear that!? The London Birth Practice midwices explain “they either proceed in a fast and furious fashion or they start and stop over a prolonged period, giving you time to transition to a rescue cesarean.” The key factors for a successful birth but in particular for a vaginal breech birth are:

1. Confident and experienced midwives (and obstetricians if present).

The London Birth Practice experience is that vaginal breech births are usually smooth and straight forward when left alone. However if a woman is frightened, anxious or poorly positioned her cervix can close down at an inopportune time and risk trapping the head of the baby.

“fearful and nervous practitioners around the labouring mother can cause exactly that. Sadly at this point in time most obstetric practitioners have lost their skills around vaginal breech births and a cesarean is recommended”. London Birth Practice

Women are advised to research who in their area has maintained and updated these important skills to give them true choice about how and where to safely birth their babies.

The Association for Improvement of Maternity Services website offer a reference guide on breech birth, setting out the facts, your options and a useful list of resources.

The London Birth Practice is a well-established group of experienced independent midwives, working throughout London. They provide you two dedicated midwives that you get to know equally well during your pregnancy. They specialise in homebirth, waterbirth and VBAC (vaginal birth after a caesarean), and they can also support hospital births and offer a post-natal care package.  Have a good links page.